And DHS Have Infiltrated To Destroy this nation and the only remaining country that boasted freedom for all.

The Orlando shooter Omar Mateen, who was licensed as a security guard and also held a firearms license was employed by the US subsidiary of G4S plc, a British multinational security services company, whose US-headquarters are located in Jupiter, Fla, and also happens to be the world’s largest security company.

Omar Mateen worked for the company since 2007. The official statement released from G4S:

“We are shocked and saddened by the tragic event that occurred at the Orlando nightclub. We can confirm that Omar Mateen had been employed with G4S since September 10, 2007. We are cooperating fully with all law enforcement authorities, including the FBI, as they conduct their investigation. Our thoughts and prayers are with all of the friends, families and people affected by this unspeakable tragedy.”

In other words, Mateen who according to preliminary reports, had been on a terrorist watch list, and who still managed to obtain weapons thanks to his various licenses and permits, was employed by one of the world’s largest security companies, where he may have had extensive clearances above his pay grade.

Has Been Infiltrated by ISIS and it is

himself that made it all possible. He appointed these men to his administration who are Muslim Brotherhood operatives. 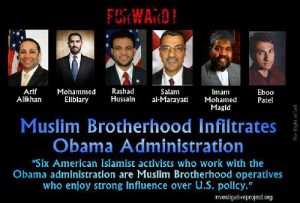 Border patrol sources said that the Department of Homeland Security (DHS) was quietly transporting illegal immigrants from the Mexican border to Phoenix and releasing them without proper processing or issuing court appearance documents.

The government classifies them as Other Than Mexican (OTM) and this week around 35 were transferred 116 miles north from Tucson to a Phoenix bus station where they went their separate ways. (Judicial Watch was present when one of the white vans carrying a group of OTM’s arrived at the Phoenix Greyhound station.)

Judicial Watch noted that it had filed a number of public records requests to get more information involving the arrangement between G4S and the government, specifically the transport of illegal immigrants from the Mexican border to other parts of the country. The photo below shows the uniformed G4S guard that transported the OTMs this week from Tucson to Phoenix:

Outraged Border Patrol agents and supervisors on the front lines say illegal immigrants are being released in droves because there’s no room to keep them in detention.

“They tell us to put them on a bus and let them go,” said one law enforcement official in Arizona. Officially, DHS denies this is occurring and earlier this year U.S. Customs and Border Protection Commissioner R. Gil Kerlikowske blasted Border Patrol union officials for denouncing this dangerous “catch-and-release” policy.

The FBI confirmed it had interviewed the 29-year-old three times before the shooting took place early Sunday morning. An official said that the FBI first became aware of the suspect, Omar Mateen, 29, in 2013 when he made “inflammatory comments to coworkers alleging possible terrorist ties.” Three years ago, all the signs were there, but nothing was done.

Mateen was interviewed twice, but the FBI was unable to verify the substance of his comments.

The agent at Sunday afternoon’s press briefing also confirmed reports that the shooter called 911 before the massacre, and said his remarks had general connections to the Islamic State of Iraq and Syria (ISIS) terror group. The content of those calls is now federal evidence.

Now the question that really gets scary, Mateen worked for the same company that has been tasked to transport illegals into the US, so, did this individual who swore allegiance to ISIS moments before the worst mass shooting and who was also employed by G4S for almost a decade, and who had been interviewed by the FBI three times and yet still managed to buy guns just last week, was also tasked in any way in facilitating the transport of illegal immigrants across the border, and if so, whether he helped other like-minded radical Islamists enter the country.

Did you know that the United States government paid $5 million to a man named Markus Wolfe to construct the Department of Homeland Security? He was the same man and creator of the East German Stasi, one of the most brutal and repressive intelligence agencies in the history of the world.

Combined with the passage of the nefarious Patriot Acts I & II, it was clear that one day, we could be threatened by this Stasi creation.

DHS has been overrun by radical Muslim interests. The Orlando shooter, Omar Mateen, who worked for the major DHS contractor, just happens to secure “90 percent of U.S. nuclear facilities.” The company that Mateen worked for is called G4S Secure Solutions USA Inc. This organization is a major contractor and provides high level security to DHS interests.

Mateen is not the only radical Muslim terrorist who has been caught working for G4s. Sami Kahn was also discovered working for this company when he was actively supporting and working for al-Qaida.

The immigrants were classified as OTM’s and included mostly Central American illegals but possibly also foreign “border-crossers” from the Middle East.

Islamic terrorist groups are commencing operations in Mexico and forming alarming ties with the country’s brutal drug cartels. In turn, the drug cartels are now associated with Hezbollah.

Do you see the incredible danger here? These terror groups have been penetrating the United States and their terrorist cells have been relocated around the United States just waiting for the right time to strike. According to a Tucson police memo, the terrorists have had 6 years to lie in wait and plan.

But the information related to the takeover of Homeland Security and resulting great national security risk doesn’t stop there, it gets worse. The East German Stasi created enterprise, DHS, has been overrun by radical Muslims from the Muslim Brotherhood.

The Muslim Brotherhood, has gained a large foothold on DHS and is on the way to dominating the institution.

This is about senior White House officials having strong ties to a terrorist organization, who in turn, have ties to ISIS.

Malik Obama, Obama’s brother is linked to the Islamic Brotherhood and probably why Obama supports them.

Do you see the DHS target practice sheet?

This is the same DHS that bought 2.2 billion rounds of ammunition. Who are these bullets intended for? Who are the massive amounts of DHS acquired bullets for?

Is Obama Moving To His Next Position Now

Hi Steve here, I want to thank all my supporters and viewers for helping me get the truth out! Keep fighting with me for truth and free speech in this country. If you're able to help me continue this fight, please use the Donorbox form below! Thank you so much! I appreciate ALL of you more than you know! Steve

Thank You For Supporting “Think About It”

Watch the MOST Banned Videos
On the Internet!